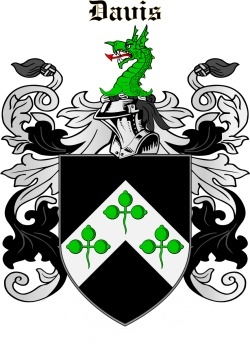 Design your own Davies Family Crest

Davies is a popular surname in Wales and England. It derives from the personal name David and, as a patronymic name, would originally have meant the 'son of David'.

David is translated as both Dewi and Dafydd in Welsh, and is the name of Wales's patron saint, St David.

The oldest use of the name as a surname involved the Welsh form 'ap Dafydd' - son of David. In Wales it developed into a settled, hereditary surname – Davies or Davis – between the 16th and 17th centuries, depending on where in the country the family lived. Higher status families and individuals adopted the fixed form earlier than others. Today, Davies is a more popular spelling in Wales than Davis and is the second most common surname overall in the country.

In some parts of Wales, most notably the south west, David and not Davies was adopted as a settled surname.

The surname was also, historically, very common in the English counties that bordered Wales, including Cheshire, Shropshire and Herefordshire as well as Gloucestershire and Worcestershire and other parts of south west England.

Other variations of the surname, including Davidson and Davison, are not common in Wales, but are evident in parts of England, especially in the north, and large parts of Scotland.

The variations Davy and Davey also derive from the same patronymic origins.

The popularity of the surname in Wales comes from both its Biblical associations as well as its connection with the country's patron saint. In Scotland, its popularity was probably enhanced by the fact that that two Scottish kings bore the name David.

According to the 1990 United States Census survey, 'Davis' was the 6th most frequently reported surname.

Your post will show up in News Feed, on your profile and in search results.
SUGGESTIONS
Share and remember important moments from your life.
See where your family is on the Global Leader board

Areas of Origin for Davies

Write an email address and click 'Invite' to share this page with more members of the Davies tribe.

Discover where the Davies Family members live around the world

Show off the Davies Family Crest…