Teeming with tales of whimsy and wonder, the myths and legends of Ireland define this rocky isle. Many of the narratives were created by the early civilizations of Druids and Celts as a way to explain the mysteries of nature, while others are just good stories, handed down through generations by the very best of story tellers the Irish.

Perhaps one of the most famous of Ireland's legends is that of the Leprechauns. Usually depicted as a bearded little old man, a leprechaun's task is to guard the treasure of the fairies. Not an easy job, since a rainbow always points to the spot where the treasure is buried, and in rainy Ireland there are lots of rainbows. As a result, while constantly moving the treasure to a more secure location, the leprechaun is in danger of being caught. Legend has it that if you catch a leprechaun, he must give you his pot of gold.

This is a bittersweet tale of a creature torn between two worlds. Beautiful brown seals by day, selkies take on a human form when the sun goes down. With their captivating brown eyed beauty, it was said many a sailor fell for these midnight maidens. Once married the selkies would retain their human form, all the while longing for the sea. If released by their captors, a selkie would return to the sea, but forever linger near to watch over their human families. 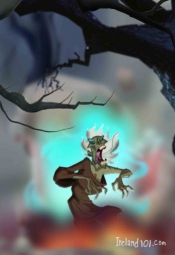 Often portrayed as a beautiful young woman, a banshee might also appear as an old washerwoman wringing out bloody clothing. While she was initially said to shriek in mourning for the death of those she loved, her story changed over the years until she became a harbinger of death.
It was said that anyone who heard her frightful scream, would soon perish.

The banshee can also appear as a crow, a stoat, a hare or a weasel which are all closely connected to ancient Irish witchcraft. 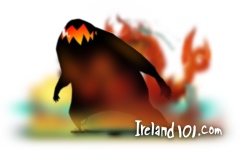 The Pooka (also known as the Phouka, Pwwka, Pooka, Puka, Phouka, Púka), or Púca in Irish is an Irish folklore shape shifting creature. Púca means "goblin" in Irish. Malicious fairies who like creating havoc in the mortal world, the pooka enjoy confusing and often terrorizing humans. Despite this fact they are considered to be benevolent. Pookas are shapeshifters and can appear in many forms, but most often in the form of a black horse who might take its rider on a terrifying ride. Pookas are also said to have the power of speech, and are reported to stand outside people's homes on dark nights calling their names. Anyone foolish enough to come out, risks being carried away. Pookas have also been blamed for many shipwrecks along the Rocky coast of Ireland.

The Pooka is a shape shifter who can change shape into something that is feared or something that is pleasing. According to legend the Pooka can may appear as horse, rabbit, goat, goblin, or dog but again it could be anything... so not an easy one to track down and a particularly difficult folklore character for the paranoid. It most commonly takes the form of a sleek black horse with a flowing mane and luminescent golden eyes.

If a human is enticed onto a púca's back, it has been known to give them a wild ride; however, unlike a kelpie, which will take its rider and dive into the nearest stream or lake to drown and devour him/her, the púca will do its rider no real harm. The púca has the power of human speech, and has been known to give advice and lead people away from harm.

When a fairy kidnapped a human child, it would leave a changeling in its place. The changeling child often looked like a human baby, but that was where the resemblance ended. Changelings were only happy in the presence of grief or misfortune. A Fairy might steal a baby to use as a servant, or to replace a malformed or deceased child of her own. The fey folk were said to be particularly attracted to beautiful babies, and parents lived in fear of having their children snatched. Simple charms, such as an inverted coat or open iron scissors left where the child slept, were thought to be protection.

This three leaf green clover is the unofficial symbol of Ireland. It has held meaning for the people of Ireland since the time of the Druids who felt shamrocks were sacred and could ward off evil. Gaining popularity in the nineteenth century, the symbol of the clover was used to illustrate books about Saint Patrick's Day, postcards, and other Irish themed items. It was often mentioned in songs and ballads, which lamented the troubled state of Irish politics. 'Oh the Shamrock', a poem by Sir Thomas Moore, was hugely popular, and served to instill the shamrock as a cultural symbol. 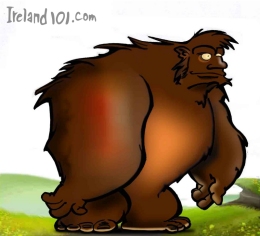 Grogochs first came from Scotland and then on to Ireland. They used to be half human and half fairy. These days the grogoch is best known in Ulster and even the Isle of Man. He looks like an old man but wears no clothes and is only covered with hard reddish fur. Grogochs are filthy creatures and curiously there are only records of male grogchs.

Wherever you see two large leaning stones you know a Grogoch used to live there.

One little know trick that a Grogoch has is his ability to become invisible and as a social being he doesn't mind showing people. A Grogoch isn't shy when it comes to farming work but will only be paid by a jug of cream.

He fears the clergy and refuses to enter a house if a member of the church is in it. So if you ever want to get rid of a bothersome Grooch, call the local priest and the Grooch will disappear! 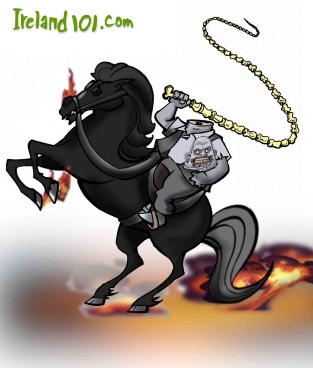 The Dullahan is one of the most interesting Irish legends and is well known in county Down and county Sligo.

The Dullahan is a crazed headless horseman who rides a black fire-breathing horse across the Irish countryside. Wherever the Dullahan stops his horse, a person dies. The Dullahan uses a human spine as a whip. His horse sends out sparks and flames from its nostrils.

The Dullahan carries his colourless, hideous, grinning head with him. The glowing head may also be used as a lantern to guide its way through the Irish countryside looking for its victims.

Using his supernatural sight, the Dullahan can see the house of a dying person wherever it is. And a warning to those who try to look for him as all they'll find is a spit of blood thrown at their faces.

The Dullahan has also been seen driving a black silent coach drawn by six black steeds. It goes at such a speed that it sets road side bushes alight! No one can escape this feared Irish fairy!