18,855 Keating members around the world 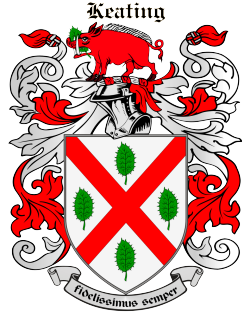 Design your own Keating Family Crest

Recorded as Keating, Keeting and sometimes McKeating, this is an Anglo-Irish surname, but despite the occasional use of the Gaelic or Celtic Mac or Mc, is one of English medieval origins. According to the late Edward MacLysaght, the foremost authority on Irish surnames, (quote) "This great family entered Ireland with the Anglo Norman invasions of 1169-1170, and is regarded as one of the earliest of the hibernicized settler families". The surname derives from the pre 7th century English patronymic Cyting, a compound of cyta meaning "kite", and originally given as a nickname to a fierce, rapacious person. The suffix "ing", in this context means the "sons or dependants of"...

BALDWINSTOWN Castle was the seat of the once prominent Keating family and probably takes its name from an early Baldwin Keating. The Baldwinstown family were a junior branch of the Keatings of Kilcowan, while there were other early branches at Slievecoilte, barony of Shelburne, and Kilcowanmore, or Ballybrennan, in Bree parish.

Keetingston, now Keeston, in Pembrokeshire, got its name from the family and was probably their home in Wales. The Keatings were in Co. Wexford from earliest Norman times; Elias Keting witnessed Hervey de Montmorency's charter in Dunbrody Abbey c. 1178-83; Baldwin Keting attested to various confirmations and grants to Dunbrody in 1200-10, and between 1207 and 1211 he and Robert Keting witnessed the charter of William Marshall to Tintern and Dunbrody.

Baldwin Keting must have been lord of Slievecoilte in the early years of the thirteenth century, as he granted the church of Slievecoilte to the Knights Hospitallers. By 1231-34 he had been succeeded by Adam Keating, who is mentioned in the charter of William Marshall delimiting the forests of Ross and Taghmon.

In 1247 Peter Keting held Kilcowan in Bargy; in 1307 it was in the possession of Nicholas Ketyng and in 1470 David Keating was Lord of Baldwinstown and applied to the church authorities for permission to have a portable altar. By the sixteenth century James and later Nicholas Keating had also acquired Coolishal, in Bannow, and Kilrane in Bargy.

In Hore's History of Wexford we read that in 1562 the Keatings were out in rebellion and burned many houses both in town and country; in 1569 Alexander Ketynge 'raised an uproar of men of war in the town of Wexford' in a dispute concerning the Deanery of Ferns. In 1464 John Ketyng was Rector of Taghmon; in 1471 Sir James and David Ketyng were appointed to levy all monies due for royal services; in 1574 Nicholas Ketyng was Canon of Ferns; in 1657 John Keating was Master of the frigate in His Majesty's Service.

Amongst the proprietors of Bargy whose lands were confiscated in the Cromwellian period were Oliver, William, John and James Keating. John of Baldwinstown, along with Laurence and Morish Keating, were transplanted to Connaght. The principal line of the family moved to Dublin, where they became silk merchants (Burkes Landed Gentry, 1958 ed.). Baldwinstown Castle and estate were granted to John Swan of an old Kentish family of Danish extraction. It later became the home of the Stafford family for generations. The Keatings moved to Dennistown, near Murrintown, where Father Patrick Keating, pastor of the old parish of Rathnacknee, was born. (His mother was daughter of Richard Barry of Poulrane).

Father James Keating, who had been Administrator of Camolin parish, was appointed Bishop of Ferns in 1819. During his reign Si. Peter's College in Wexford and the Carmelite Convent in New Ross were founded. Bishop Keating reconstructed the parochial divisions of the diocese in 1835. He commissioned the great architect, Welby Pugin, 10 draw up plans for a new cathedral in Enniscorthy. However, he did not live to see the cathedral completed, as he died on September 7, 1849. He was a native of Coolnahorna, Marshalstown.

Philip Keating, South Main St., Wexford, who died in 1919, was prominent in the public life of Wexford. He was son of Patrick Keating, of Prospect and Ballygoman, Barntown, and was a Director of the Wexford Meat Supply Company. As a public representative he was chiefly responsible for the introduction of the St. John of God Nuns to the nursing staff of the County Hospital. His grand-uncle, Fr. James Keating, was born at Davidstown, Barntown.

John Keating of Ballybough, Tomhaggard, was an extensive farmer and stock-breeder and served for many years as a member of Wexford County Council and in Dail Eireann. He was first elected to the Dail as a National League candidate in the general election of 1927. He was successful again in the 1932, '33 and '37 elections as a Cumann na nGaedheal candidate. He lost his seat in 1943 but was re-elected for Fine Gael in 1944 and remained in the Dail till 1948. He died in 1956. His brother, Rev. Matthew Keating, was parish priest of Bannow until his death in 1950, having previously spent over thirty years in the House of Missions, Enniscorthy. Their family belonged to Sarshill, Kilmore.

Keatings were prominent in the business life of Taghmon for many years; one of this family married James J. Stafford, founder of the firm of J. J. Stafford & Sons, Wexford.

Early in the fourteenth century Keatings from Co. Wexford founded branches of the family in south Tipperary and west Limerick.

My 4th Great-Grandfather was James Keating (1788–1849) BIRTH 22 OCT 1788 • South Carolina, USA DEATH 11 JAN 1849 • Carroll, Tennessee It was believed that either his father or his father's father was from Ireland. I can't find any additional information on the parents of my 4th Great-Grandfather or his brother Nicholas Keating (1785–1840) BIRTH 1785 • South Carolina, USA; DEATH 1840 • Carroll Co. Tennessee. My aunt traced my family back to Ireland before she passed, but I don't have any of that information. Any assistance or information would be greatly appreciated and helpful! Thank you so much! Best, Heather Keating

Hello! Hoping to learn about my lineage. My father is Norman and my grandparents are John and Isabella. My paternal great grandfather was an interior decorator for the Titanic. They lived in Belfast.

Areas of Origin for Keating

Write an email address and click 'Invite' to share this page with more members of the Keating tribe.

Discover where the Keating Family members live around the world

Show off the Keating Family Crest…