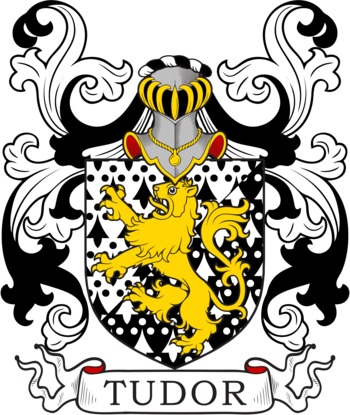 Design your own TUDOR Family Crest

This is a surname which has strong Welsh roots. It became particularly famous when the House of Tudor was established after Henry VII (1457–1509), a member of the Tudor family of Penmynydd, Anglesey, became the King of England.

The name itself derives from the Greek Theodoros ('theos' meaning god, and 'doron' meaning gift), and appears in a range of different forms across Europe, including Theodore, Teodori and Teodoro.

The original Welsh spelling and pronounciation was 'Tewdwr' and 'Tudur', and was a personal name. As a patronymic surname therefore it would relate back to an ancestor with that given name. In Wales fixed hereditary surnames only gradually became apparent between the 16th and 19th centuries, depending on where in the country a family lived and on their social status. Higher status families would have adopted hereditary surnames earlier than the remainder of the population.

The earliest references in Wales to the name therefore appear as a personal name and as 'ap Tewdwr', or 'ap Tudur' (or other associated spellings), meaning 'son of Tudor'. Those early examples come from the Brut y Tywysogion (Chronicle of the Welsh Princes) and include Dyfynwal mab Tewdwr (Dyfynwal the son of Tudor), 760 A.D., and Tewdwr mab Einawn (Tudor the son of Einon), 993 A.D.

Hereditary surnames such as Tudor began to gain popularity amongst the landed gentry in Wales when Henry VII ascended to the English throne.

While the surname has been recorded throughout Wales, it was relatively more popular in the north of the country. In England, during the mid-19th century the surname was mostly evident in the counties that border Wales, including Shropshire, Gloucestershire and Herefordshire, while there were also some significant clusters elsewhere, including in Staffordshire and London.

BardsleySurnames of the United Kingdom (1912) by Henry Harrison

Your post will show up in News Feed, on your profile and in search results.
SUGGESTIONS
Share and remember important moments from your life.
See where your family is on the Global Leader board

Areas of Origin for TUDOR

Write an email address and click 'Invite' to share this page with more members of the TUDOR tribe.

Discover where the TUDOR Family members live around the world

Show off the TUDOR Family Crest…