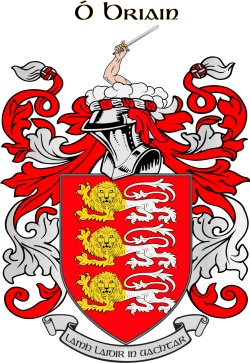 Design your own O'BRIEN Family Crest

Ó Briain -anglicised O' Brien, O' Brian, earlier Bryen etc (the 'O' being often kept) were of the Dalcassian population group, whose ancient territory was in Thomond. Originally of the Uí Toirdealbheagh clan, the O?Briens take their name from the 10th century Brian Boru, who enlarged their territory, engendering several branches which came to dominate the province of Munster.

They provided several kings of Munster. Their apogee, however, was the high kingship of Ireland in the person of Brian Boru himself, Instrumental in containing the Norse expansion, although not wiping it out as legend has it. Brian was killed, again according to legend, by a Norseman whilst praying in his tent after the battle of Clontarf in 1014.

MacLysaght writes in 'Irish Families (1982) that the surname was in use forty years after Brian's death.

There has been some confusion with O Braoin of Roscommon/Midlands, and MacBraoin of Kilkenny, usually anglicised Breen, but also O' Brien.

MacLysaght mentions that the Norman surname Bryan has occasionally been absorbed by O' Brien.

The main branches of the Uí Bhriain were: the O' Briens of Ara in North Tipperary, whose chief was known as Mac Uí Bhriain Ara, of Coonagh and Pubbelebrien in Co Limerick, of Aherlow in Co Tipperary, and down in the south of Co Waterford.

Most births in the last decade of that century were in Munster and Leinster.

The O' Briens were at the centre of the traumatic wars in Ireland during the 16th and 17th centuries. Perhaps the most infamous bearer was Murrough O' Brien, Earl of Inchiquin, a native protestant war leader during the Cromwellian Expugnatio. Although at first pro-royalist in the Civil War, he submitted to Parliament in 1644, and then again changed sides in 1648. He had earlier massacred native Catholics after the Irish rebellion of 1641.

Whereas Daniel O' Brien, 1st Viscount Clare, was a leading member of the Confederacy, which inspired the revolt of 1641!

Indeed, they were granted many titles of nobility by the crown: Earls of Thomond, Viscounts Clare, Earls of Inchiquin. In the Battle of the Boyne they were active on both sides: the losing O Briens (the Jacobite Viscounts Clare, see above) fleeing to France and exile.

I wish I were down by Plassey
to watch the Shannon flow,
to Curragour's turbulent echoes
of warring Thomond, long ago,

sweep past the swans, dancers bestilled,
the river courses to where
the clan O Brien with castles filled
the land from Bunratty to Ardnacrusha.

It's there diminish your darker fears-
the clouds part over the hills of Clare,
and blue of purest sapphire appears:
your step is lighter; your prospects fair.

My 3rd Great Grandfather Daniel O’Brien left a written bio but I have yet to find any records to confirm. He also wrote letters to William Smith O’Brien in 1815 but I have never seen those. He stated he was born about 1774 in Tiermclane in Co. Clare. Son of Bryan O’Brien (obryan) and Mary O’Brien. Bryan being a direct descendant from the Inchiquin line and Mary from the Thromoland line. They married to settle a long standing feud. He came to the US in 1798 and eventually settled in what is now Belington WV on 2,000 acres of which is called the O’Brien flats. I have hit a wall looking for his parents and am wondering if he listed his dates correctly because he had some confusion about the year he was born. If anyone can help I would be so grateful! I have a copy of his autobiography retyped from his original letter which has some more information. Thank you, Susan

Areas of Origin for O'BRIEN

Write an email address and click 'Invite' to share this page with more members of the O'BRIEN tribe.

Discover where the O'BRIEN Family members live around the world

Show off the O'BRIEN Family Crest…