5,763 HULBERT members around the world 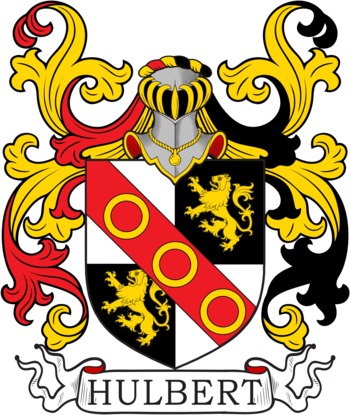 Design your own HULBERT Family Crest

This interesting surname is of Anglo-Saxon origin, and derives from the Middle English given name Holbert, itself a development of the Olde English pre 7th Century "Holdbeorht", composed of the Germanic elements "hold", meaning friendly, gracious, with "berht", bright, famous. The popularity of the name is borne out by the number of surnames it has generated; the personal name appears as "Holbertus" (1168) in the Archaeological Records of Kent. The surname dates back to the early 13th Century (see below), and early recordings include: John Holdebert (1219), in the Assize Court Rolls of Yorkshire, and John Hulberd (1524), in the Subsidy Rolls of Sussex.

William Ambrose Hulbert, (1832-82), born in NY and founder of the National League of Baseball and member of the Baseball Hall of Fame

Capt. John Hulbert carried the Hulbert Flag from Fort Ticonderoga to Philadelphia in 1775. It’s believed to have influenced the design of the American flag.

Issac Hulbert, settler of Hulberton, NY, along the original route of the Erie Canal (Between Rochester & Lockport)

Tell us about any famous HULBERT (or surname variant) you think we should add here. We will get our genealogists to check them out and add them to the list. Thanks!

Join the conversation with the HULBERT tribe

William Ambrose Hulbert, (1870s-80s-90s), born in Upstate NY and founder of the National League of Baseball and member of the Baseball Hall of Fame; Captain John Hulbert of the Long Island Militia (mid/later-18th Century America), earlier designer of a red, white & blue US flag ("The Hulbert Flag)-- prior to Betsy Ross; and Issac Hulbert, settler of Hulberton, NY, along the original route of the Erie Canal (Between Rochester & Lockport)

Write an email address and click 'Invite' to share this page with more members of the HULBERT tribe.

Discover where the HULBERT Family members live around the world

Show off the HULBERT Family Crest…