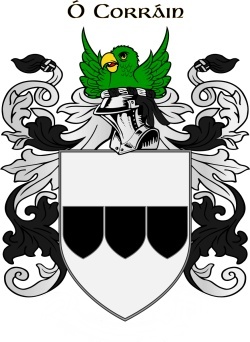 Design your own CURRAN Family Crest

Curran (Irish: ? Corr?in) is an Irish and also a Scottish surname. The Irish is now found in County Waterford but originates in East County Cork, where the ? Corr?ins were a major branch of the ruling dynasty of the ancient U? Liath?in kingdom.

We are hoping to find our roots. My gg-grandfather was John Thomas or Thomas John Curran. Called John but listed as Thomas J on my mom's birth certificate. He was born in Ohio, USA to Irish immigrant parents. He traveled to Ireland and returned to America on June 1, 1883 with wife Mary (nee Flanagan?), sons Michael (b. 1876?), and baby John (age 1, died on the sea voyage). Ship was "City of Rome", left Queenstown Ireland late May, stopped at Liverpool, then to New York, arriving June 1, 1883. They moved to Cincinnati, Ohio to be near his parents. John/Thomas and Mary had daughter Mary Eva in 1884, then 2 sons, Thomas and William. My g-grandmother, Mary Eva, used to tell my mom about two uncles who lived in County Cork and were both priests. That's about all we know. Any info on this family would be much appreciated. Thanks!

I am the 2x great-granddaughter of Capt. Robert Curran of Portaferry (born abt. 1838 and died on 7 Jun 1890). Capt. Robert Curran was the son of Robert Curran, a Whitesmith (born about 1806 and died in approx. 1871) in Portaferry. My Curran family relatives resided at New Row in Portaferry in the 1800's, which has since been renamed "Shore Street" and was located directly across the street from Portaferry's Gas Work's (which no longer exists but used to be next to the Saltpans). I believe that Capt. Robert Curran, who was a Fisherman/Master Mariner, had at least 3 brothers (John, Thomas and Patrick Curran), who were also all sailors/seamen. In January of 1867 at St. Patrick's Roman Catholic Chapel (Diocese of Down & Connor), Capt. Robert Curran, married the daughter of a Master Mariner from Killough, County Down named Capt. Richard McSherry (my 3x great-grandfather), named Mary McSherry. Capt. Richard McSherry lived in/was associated with the residence at Fisherman’s Row in Killough, County Down during the early to mid-1800’s before he moved his family up to Ballymacarrett, and then Belfast’s old Sailortown neighborhood in the early 1860’s. For most of Capt. Robert Curran and Mary McSherry’s marriage they lived and raised their 7-8 children where Mary’s father, Captain Richard McSherry, owned a Pub/Tavern & Inn at 15 Corporation Square, directly across the street from the Belfast Harbour Office, which was called either "The Harbour Arms" or "The Harbour Arms Hotel" or "The Harbour Hotel" from approximately 1863 until his death in September of 1887. Capt. Robert Curran and Mary McSherry Curran's 2nd eldest daughter is/was my great-grandmother, Jane Elizabeth Curran (married name Oxton). I am told that every summer up until she immigrated to Brooklyn, New York with her husband John F. Oxton, and their 2 sons in May of 1924, my great-grandmother, Jane Elizabeth Curran Oxton, would return to the Killough and Portaferry areas to visit her extended family, and to also ensure that her sons, Jack & Charlie Oxton (Charlie is my paternal grandfather), knew their Irish roots and Irish relatives by being able to spent time in the beautiful part of Northern Ireland where their mother and maternal grandparents grew up. I am trying to connect with any remaining Curran and McSherry relatives (or anyone who happened to know of my Curran or McSherry relatives) who may still remain in or around the Belfast, Portaferry and Killough areas? Both my McSherry and my Curran relatives (at least the ones I’m specifically aware of) were all Seamen/Mariners/Fisherman in County Down and Belfast throughout the 1800's. I am also wondering if anyone has any old photographs of New Row/Shore Street in Portaferry, Corporation Square/Tomb Street in Belfast directly across from the Belfast Harbour Office, or of Fisherman’s Row in Killough that they would be willing to share with me? I have also been able to confirm that several of my direct McSherry Relatives, including my 3x great-grandfather Captain Richard McSherry and are least 3 of his daughters are all buried at Rossglass Catholic Graveyard. Any tid-bit of information you are willing to share will be GREATLY appreciated!! ???????????????????? PLEASE feel free to send me an e-mail directly at joxtonlaw@gmail.com if you have any stories, photographs or information you can share or are willing to share about any Curran ancestors from eastern County Down (Downpatrick, Portaferry areas). Thank you for your time. Please also pass this message along to anyone you know who may be interested in connecting with me or may have information that may help me in my search for relatives, stories and/or photographs of the places my great grandparents were born and raised.????????????????

OOps! Error in earlier conversation. James Curran's birth date registered in the District of Whitechurch was August 4, 1866 NOT August 4, 1888.

James Curran was born August 5, 1866 in Ireland. He died in St. Louis, Missouri August 18, 1910. According to the death certificate his father was John Curran and his mother was Margerette Curran. (Curran was listed as her maiden name!!) James was married to Hannah Crowley in St. Louis, MO November 21, 1888. I found a James Curran birth registered in the District of Whitechurch in the Union of Dungarvan in the County of Waterford. It lists his father as John Curran and Margaret Curran formally Curran, both from Ballygambon. James was born on August 4, 1888. I bothers me the birth date differs by a day. (Volume #14,GS Film #101043, Digital folder #004187283, image #00091)

Areas of Origin for CURRAN

Write an email address and click 'Invite' to share this page with more members of the CURRAN tribe.

Discover where the CURRAN Family members live around the world

Show off the CURRAN Family Crest…