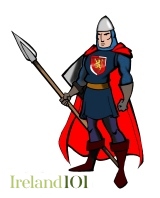 The Norman invasion of Ireland was a two-stage process, which began on 1 May 1169 when a force of loosely associated Norman knights landed near Bannow, County Wexford. This was at the request of Dermot MacMurrough (Diarmait Mac Murchada), the ousted King of Leinster, who sought their help in regaining his kingdom.

On 18 October 1171, Henry II landed a much bigger army in Waterford to ensure his continuing control over the preceding Norman force. In the process he took Dublin and had accepted the fealty of the Irish kings and bishops by 1172, so creating the "Lordship of Ireland", which formed part of his Angevin Empire.