An introduction to Irish Whiskey

There is some gentle conflict between the Scottish and the Irish as to which country “invented” whiskey/whisky. It is now widely accepted that the art of distillation was brought to Ireland by monks who had learned the technique while travelling throughout Europe and the middle east in the 5th and 6th centuries. This early form of distillation was to distil grains and drink the resulting alcohol unaged and often flavoured with herbs, making it more like gin than whiskey.

The first written reference to whiskey or “Uisce Beatha” (ishka baha) meaning “water of life” in Ireland came in the Red Book of Ossory, in 1324, 170 years before the first written records were made of whisky in Scotland, in the form of primitive excise returns, so we know for sure that the Irish were writing about whiskey long before the Scots. It was the anglicised pronunciation of Uisce Beatha that led to the name whiskey.

Malt whiskey was the main style of whiskey in these early days of whiskey production – malted barley was fermented and then distilled to create a spirit which was then aged. However, following the Malt Tax of 1682, the legitimate distillers of Ireland felt that they were being unfairly treated by the crown and as a small act of rebellion, started using a mixture of malted and unmalted barley to make whiskey. The resulting whiskey cost them less in tax and had an oilier spicier character, and so the style Pure Pot Still Whiskey was born.

At this time, Ireland not only developed a huge number of distilleries, but also a thriving illegal industry, in the shape of Poitín (potcheen), unregulated spirit made from potatoes or grain. Poitín in those days was often stored in barrels buried in boggy ground, which meant that it could be aged, though probably not for three years as is required in the modern day for Irish whiskey. A pest which destroyed vines in France from 1871 decimated the Cognac industry, which among many other things helped Irish Whiskey to become the world’s best-selling spirit towards the end of the 19th century. 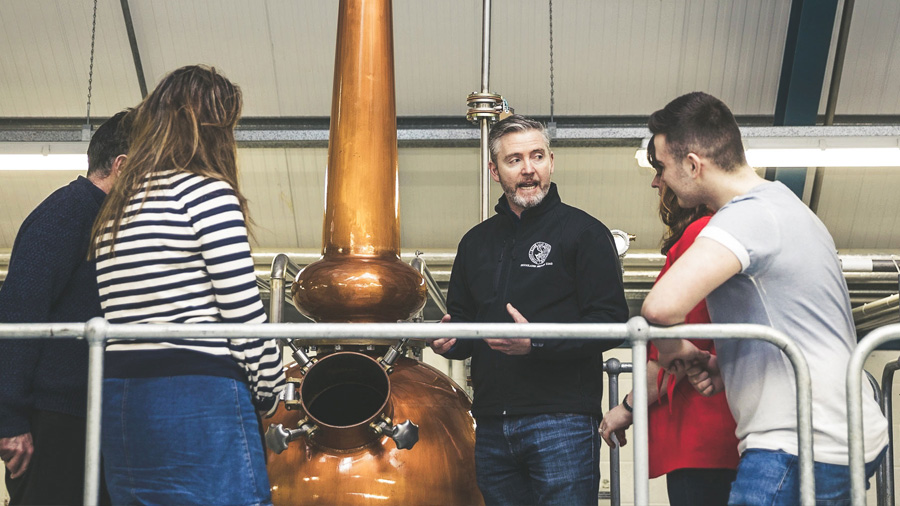 During this golden age of Irish whiskey, the distilleries of Dublin felt that their Pot Still style whiskey was a far superior liquid to that of Cork and Belfast and beyond. Dublin Whiskey sold at a premium price and was called for by the customer. To differentiate themselves from both other Irish whiskeys and Scotch whisky they added and “e” to Whisky. Hence, anything produced outside of Dublin used the old “whisky” spelling, while Dublin Whiskey was spelled with an “e” – this spelling was later adopted (1970’s) by all Irish whiskey.

Unfortunately, the continued success of Irish whiskey was not to be. Perhaps in a cruel twist of fate, it was the pride that the big Irish distillers had in their product that would be the first step in its downfall.

An Irishman named Aeneas Coffey had spent over 20 years as a customs and excise officer in Ireland up to 1924. He applied for a patent for a new type of continuous column still in 1931. The Coffey Still, as it was later named, made spirit in a much more efficient and cost-effective way than the copper pot still that was used by distillers of the time. Coffee presented his invention to the big Irish distilleries, who shunned him immediately – calling the spirit made on his stills “silent spirit”, to them this was not whiskey. However, the Scottish could see merit in his still and embraced it. They blended the lighter style grain whiskey from the Coffee still with heavier Highland Malt style whiskies, creating for the first time, Blended Scotch Whisky. The Irish may have thought their prized Pot Still whiskey was the best, but the consumer of the day was drawn to the lighter blended scotch whisky - the downfall of the Irish distillers had begun.

In the early 1900’s Ireland gained independence from The UK and was hit with trade embargoes to all commonwealth countries, meaning they could no longer sell to the likes of the UK, India, Canada, Australia or South Africa. Following independence, a civil war raged in Ireland from 1919 to 1921 which negatively impacted all industry on the island. The final nail in the coffin of Irish whiskey was the introduction of Prohibition in The USA – the last remaining important export market for Irish whiskey.

With Irish distilleries struggling through trade embargoes and a civil war back in Ireland, stock began to dry up very quickly. As soon as the illicit importers of America could no longer source real Irish Whiskey, which their high-end customers still wanted, they had to turn to bootleggers, who were happy to colour and flavour poor quality homemade spirit and call it Irish whiskey. These bootlegged and often dangerous poorly made spirits were often bottled and labelled with Irish sounding names – further damaging the reputation of Irish whiskey the world over.

Through the 1920’s, 30’s and 40’s Irish distilleries continued to close. The area around Tullamore was devastated in 1954 with the loss of both the Tullamore and Kilbeggan distilleries, two of the more prominent producers left at that time.

Pot Still whiskey was almost becoming a thing of the past, as now the remaining Irish distillers had finally embraced column distilling and blended whiskey. The bigger brands continued to sell well internationally – Jameson, Powers, Paddy, Bushmills, Tullamore D.E.W. - but the industry overall was in very poor shape.

By the early 1980’s Ireland was left with just two distilleries – Middleton in Cork became the new home to Jameson, Powers and Paddy among other brands and Bushmills in the north, both under the umbrella of Irish Distillers, which was later bought by Pernod Ricard. Bushmills in the North was acquired by Diageo in 2005 and then by Casa Cuervo in 2014.

John Teeling set up a new distillery in 1987 in Co. Meath. The Cooley Distillery challenged the dominance of Irish Distillers and was home of several important brands. Connemara Whiskey for instance was created so that the legacy of peated Irish whiskey would not be lost. The Teeling family sold Cooley to Beam Suntory in 2011, the funds of this sale helped John Teeling’s sons to set up the now hugely successful Teeling Whiskey Distillery in Dublin in 2015. 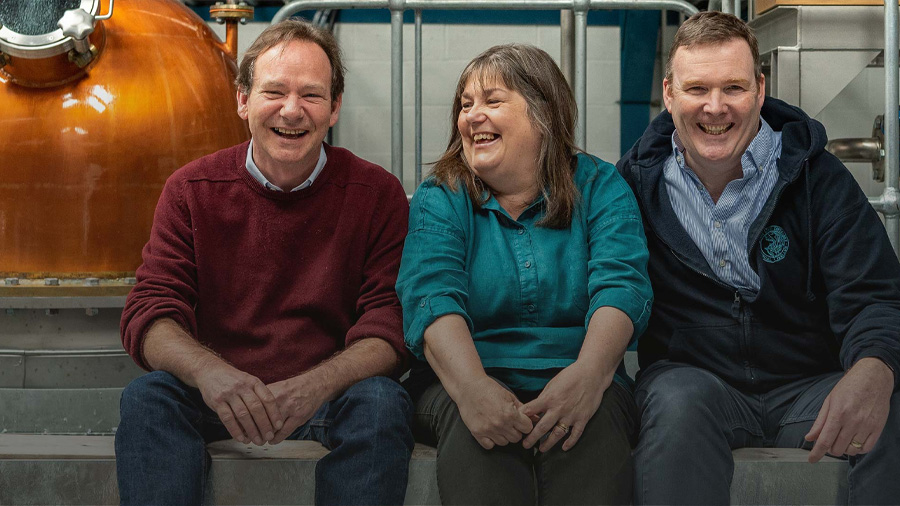 Thankfully, since 2008 many new Irish whiskey distilleries have been springing up across Ireland and it is hugely positive to see that many of these are situated in rural Ireland, where distillation was often at its best. The rugged and beautiful county of Donegal in Ireland’s north west was renowned for the quality of spirits distilled there, namely Poitín. Donegal Poitín was considered the very best and was made using copper stills and barley. The fierce independence of Donegal’s people, coupled with vast mountainous terrain made confiscation of distillation equipment and enforcing the law very difficult for authorities, bridges were burned, peninsulas were declared independent from the rest of the nation and many stills and barrels were hidden, buried in the soft boggy ground, perhaps still there to this day.

Sliabh Liag Distillers was founded in 2014 and undertook the mighty task of reclaiming the rich distilling heritage of Donegal. They became the first legal distillery in the county in over 180 years with their An Dúlamán Gin Distillery in 2017. While they build their €6m whiskey distillery in the heritage town of Ardara on the Atlantic coast of Donegal, they have sourced the finest Irish whiskeys for their award-winning blend – The Legendary Silkie Irish Whiskey. Deeply rooted in local folklore, The Legendary Silkie is inspired by folktales of the Silkie Seals of the Donegal coast, mythical shapeshifters who come ashore on moonlit nights and transform into enchanting sea maidens. The Legendary Silkie Irish Whiskey is a blend of double and triple distilled single malts with soft grain whiskey and a hint of peated malt. The company are soon to launch a new expression of Silkie, The Dark Silkie, which will contain a double distilled and triple distilled peated single malts, it is rich and smoky in character but sweeter and smoother than peated Scotch whisky. 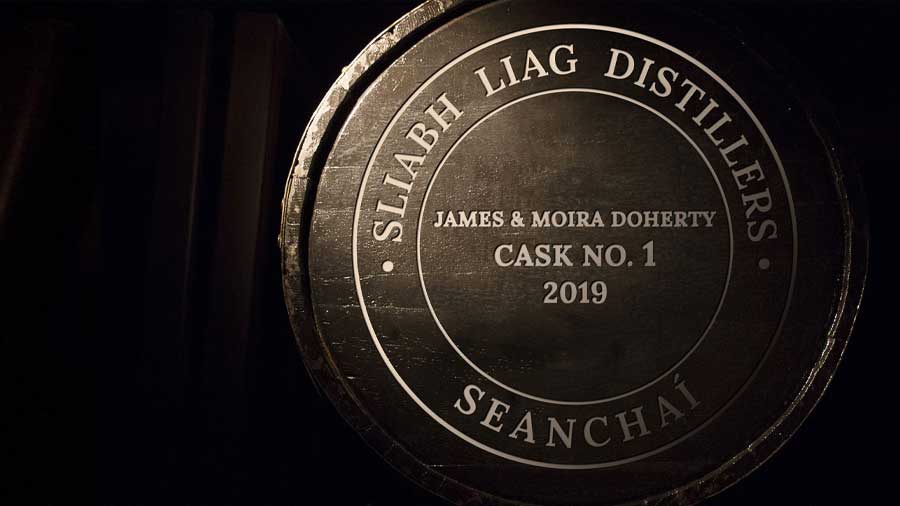 Founder and Managing Director or Sliabh Liag Distillers, James Doherty, explains, “In our mission to reclaim the distilling heritage of Donegal, we want to bring the customer on a journey. In the past in rural Ireland, distillers would have had no other source of heat to dry their barley than peat turf, we want to remain true to this and so have created a rich smoky blend that will reintroduce this fantastic style of whiskey. In our Ardara Disitllery, which is due to be completed later this year, we will produce peated Pot Still and Single Malt whiskey, reminiscent of the whiskey made in this part of Ireland long ago.” James goes on to note that Irish peat is predominantly heather based, giving it a much sweeter flavour profile than that of Scotch peat which is forest based, he says, “This is a hugely exciting time for Irish whiskey, new distilleries are embracing innovation, we’re not only reviving old styles but creating new ones”.

As an industry that was at standstill for over a century, Irish whiskey is now in the hands of a new generation of producers, innovation and modern thinking is flourishing, bolstered by centuries old knowledge and those brave enough to return to the beautiful wilderness of rural Ireland. Perhaps James Doherty puts it best – “Donegal and distilling are in our soul”.

FOOTNOTE:
Sliabh Liag Distillers are now offering you a chance to join them on their journey to reclaim the distilling heritage of Donegal.  The company invites you to Bígí Linn (bee- gee linn) which means “be with us” in Irish, whether you’d like to join their membership rewards programme, become an investor or purchase one of the first casks of whiskey that will be filled at the new Ardara Distillery. Learn more here -