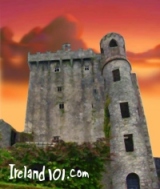 Blarney Castle is a medieval castle in Blarney in County Cork in the south west of Ireland. The castle was built around 1446 by the MacCarthy clan, Kings of Desmond.

At the top of the castle lies the famous Stone of Eloquence which is also known as the Blarney Stone. Tourists visiting Blarney Castle can hang upside-down over a sheer drop to kiss the stone, which is said to give the gift of eloquence. There are many legends as to the origin of the stone, but some say that it was the Lia Fáila magical stone upon which Irish kings were crowned.

Ben Bulben is probably the most stunning rock formation in Ireland. The pleateau formation, which is a part of the Dartry Mountains, overlooks Sligo Town in County Sligo, in the northwest of Ireland. For those interested in climbing up Ben Bulben it is a tough approximately 2.5 hour climb but on a clear day you have a stunning view of as far north as Donegal and as far south as Mayo.

If you make it to Ben Bulben you have to check out the famous Irish writer William Bulter Yeats' grave which sits in a grave yard at the foot of Ben Bulben.

Whereas Galway and Connemara is well known outside of Ireland, County Sligo is less known but just as beautiful.

Also take a trip out to Rosses Point pennisula, about a 15 minute drive from Sligo town.

The Skellig Islands are called Na Scealaga in Gaelige. The islands are two small, steep and rocky islands lying about 10 miles west of Bolus Head on the Iveragh Peninsula in County Kerry. They are famous for their thriving wild bird populations including gannets and puffins, and also for an early Christian monastery that is now a world heritage site.

Little Skellig is unfortunately closed to the public, and holds Ireland's largest and the world's second-largest Northern Gannet colony, with almost 30,000 pairs.

Skellig Michael is the larger of the 2 islands, rising to over 230 m above sea level. With a sixth-century Christian monastery perched on a ledge close to the top.

The Cliffs of Moher

The Cliffs of Moher are one of the top tourist attractions in Ireland. The cliffs are on the south-western edge of the Burren area near Doolin, which is located in County Clare, Ireland.

The cliffs rise 394 ft above the Atlantic Ocean at Hag's Head. The area attracts close to one million visitors per year. On a clear day, the Aran Islands are visible in Galway Bay, as are the valleys and hills of Connemara.

The cliffs were recently made famous as the digital backdrop in a scene in a recent Harry Potter film.

The Aran Islands are a group of three islands located on the west coast of Ireland in Galway Bay. They are one of the most popular tourist attractions in Ireland.

The three Aran Islands are Inishmore (the largest island), Inishmaan and Inisheer.

When you are on Inishmore why not rent a bike and cycle to an Iron Age fort called Dun Aengus. The fort sits on the edge of a 100 metre cliff with stunning views out into the Atlantic Ocean. Dun Aengus itself is a series of concentric circular walls, the innermost; the citadel encloses an area approximately 50 meters in diameter with 4m thick walls of stone.

It has to be said that the Aran Islands, famous for its native Irish speakers and cheesy Irish sweaters (aka jumpers), is a little touristy now but is still a stunning place to visit. The trick is to get out of the villages where you are constantly being sold something or other and enjoy the isolation of an island stuck out in the Atlantic. For less commerical islands there are plenty of other islands to visit. However no other island has the stunning view of Dun Aengus! 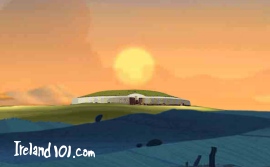 Newgrange is an ancient passage tomb located in County Meath, Ireland. The megalithic passage tomb dates from between 3100 and 2900 BC which was during the Neolithic period. It is also likely that Newgrange had some religious significance as it aligned with the rising sun on the winter solstice, which floods the tomb with light. It is an incredible to think that these ancient people could build such a complex structure. It is even more incredible to think that this structure is older than the pyramids in Egypt.

Every solstice there is a lottery to see which lucky people get to sit in the passage tomb to see it light up perfectly. Unfortunately the Taoiseach, Irish Prime Minister, always seems to by-pass the lottery and just turn up! 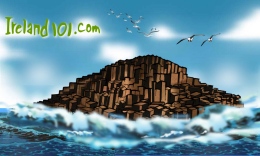 Legend had it that the ancient Irish warrior Fionn Mac Cumhail built the causeway to walk to Scotland to fight his Scottish enemy Benandonner. 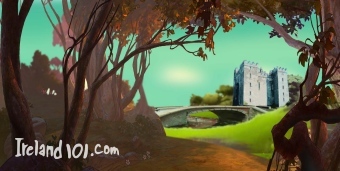 Bunratty Castle is one of Ireland's most popular tourist attractions which is in County Clare, southern Ireland. The castle sits with a series of cottages representing an early 19th century folk park. The individual cottages are a fasinating The name Bunratty, means the "bottom" or end of the "Ratty" river. This river, alongside the castle, flows into the nearby Shannon estuary. From the top of the castle, one can look over to the estuary and the airport.

The Bunratty Folk park gives you a glimpse into Irish life in the 19th century: This features reconstructions of historical cottages and buildings, recreating the general feel of the 19th century with a period style village main street. Old tools, furniture and artifacts are displayed, with the village kept alive by some inhabited shops, an old home bakery and peat fires in cottages. The Folk Park excels at showing life in all classes from around Ireland throughout recent history. In the village, you can see the school, post office, shops, and enjoy drinking at a working pub. Animals are a big attraction for kids, including two very large Irish wolfhounds.

This living museum is an incredible resource to learn about Irish history. From chickens wandering around to local women in costume, making apple pies, it's a glimpse into Irish life in the 19th century. The houses are furnished with period furniture - note the very small beds, the prized dishes, and how smoky the houses were from the peat fires. We learned that there is still a local thatcher that works on the roofs. From the blacksmith's forge to fishermen's cottages, from single story houses to double story houses of the more weathly folks, from the Golden Vale Farmhouse (from Limerick) - a house of a prosperous family - to the classical Georgian Bunratty House, you can learn of the various ways that the social classes lived and worked.

Today it is a major tourist attraction along with the castle as it sees thousands of people pass through its gates every year.

The Book of Kells, County Dublin

Visitors enter through the Library Shop and proceed to the Book of Kells "Turning Darkness into Light" exhibition; then to the Treasury where the Book of Kells and other related manuscripts are on view; then proceed upstairs to the magnificent Long Room which houses 200,000 of the Library’s oldest books in its oak bookcases.

The Ring of Kerry, County Kerry

The Ring of Kerry is Ireland’s most scenic route. It is a road that takes you through 10,000 years of dramatic history, located in County Kerry. It’s a road that takes you from deep forest to the crashing waters of the Atlantic. It’s a road through rugged, majestic landscapes: where wild stag roam and where tumbling waterfalls crash into crystal streams teeming with wild salmon. Its spectacular beauty is beyond question and it is a natural centre for outdoor pursuits that include golf, water-sports, cycling, walking, running, riding and the very best fishing in freshwater rivers for salmon & trout and at sea for bass, ray, pollack, conger eel, cod, flounder, wrasse, mullet, mackerel and tuna.

The Ring of Kerry has some of the Europe's finest beaches (See Rossbeigh in the Ross-Maine area) that provide all the facilities for a traditional seaside holiday. Above all, the Ring of Kerry provides an amazing insight into the ancient heritage of Ireland - see the Iron Age Forts & Ogham Stones, Old Monasteries and a landscape carved out of rock by the last Ice Age 10,000 years ago. Visitors to Ireland should not miss a trip to the beautiful Ring of Kerry Tourism.

The Ring of Kerry can easily be done as a day trip, but if you want to stretch it out, places to stay are scattered along the route. Killorglin and Kenmare have the best concentration of dining options; elsewhere, with a couple of notable exceptions, basic pub fare is the norm.

Ross Castle Winner of 2013 Certificate of Excellence by Tripadvisor.

Ross Castle is a tower house and keep on the edge of Lough Leane in Killarney National Park in County Kerry. The castle was built by O'Donoghue Mór in the 15th century. It came into the hands of the Brownes who became the Earls of Kenmare and owned an extensive portion of the land that are now part of Killarney National Park. Legend has it that O’Donoghue still exists in a deep slumber under the waters of Lough Leane. On the first morning of May every seven years he rises from the lake on his magnificent white horse and circles the lake. Anyone catching a glimpse of him is said to be assured of good fortune for the rest of their lives.

The castle is open to the public seasonally with guided tours. It is located 2km from Killarney, off N71 (Kenmare Road). Access to the castle is by guided tour only. Photography and video-taping is not allowed while on the tour. The site is very restricted and can only accommodate groups of 15. The duration of the tour is 40 minutes. All tours groups must pre-booked.

Built in honour of Ireland’s patron saint, Saint Patrick’s Cathedral stands adjacent to the famous well where tradition has it Saint Patrick baptised converts on his visit to Dublin. The parish church of Saint Patrick on this site was granted collegiate status in 1191, and raised to cathedral status in 1224. The present building dates from 1220. The Cathedral is today the National Cathedral of the Church of Ireland (a church of the Anglican communion) and also serves as a popular tourist attraction in Ireland. Today the Cathedral is open to all people as an architectural and historical site, but principally as a place of worship. Charges are made for those visiting for sightseeing and these contributions directly support the future of this holy and historic building.

The Guinness Storehouse is located in the heart of the St James’s Gate Brewery in Dublin, which has been home to the 'black stuff' since 1759. The seven storey building, a former Guinness fermentation plant, has been remodelled into the shape of a giant pint of Guinness. A visit will teach you everything you ever wanted to know about this world famous beer, from how Guinness is made, to the ancient craft of Guinness barrel making in the cooperage and on to the creation of the world famous brand. The highlight for many visitors is the Gravity Bar, where they collect their end of tour pint of Guinness and can relax and enjoy the 360 degree views across Dublin City. Facilities include, three bars (Brewery, Source, Gravity) coffee shop, restaurant, meeting and events facilities, pull the perfect pint opportunity, wheelchair accessible, complimentary car park on Crane Street.

This is great :D

This was a very helpful website and I recommend this to others.